Alpine is setting a new course in the aftermarket with the arrival of the INE-Z928HD Audio/Video/Navigation (AVN) system with 8-inch WVGA screen. Perfect Factory Integration Technology (F.I.T.) kits complement the INE-Z928HD’s 8-inch screen, for a seamless factory look in the dash.

“We know that new cars are coming with larger screens, which are popular not just for the size, but also because they offer great performance for features like navigation and rear-view cameras,” said Steve Crawford, vice president and general manager, aftermarket business unit, Alpine “Our INE-Z928HD and Perfect F.I.T. dash kit program is an industry game changer, since it’s the first aftermarket 8-inch platform with integrated installation solutions. We are filling the need for a large-screen format for aftermarket consumers, which then creates sales opportunities for our 12 volt retail specialists.” 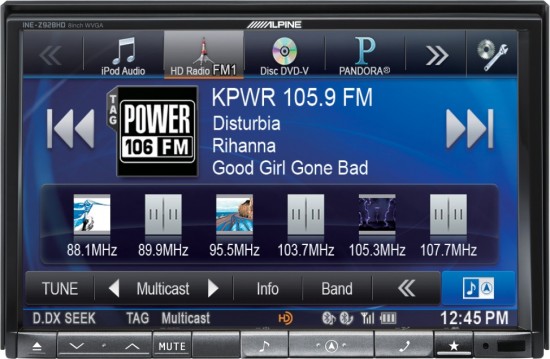 Key Entertainment And Information Features Of The Ine-Z928HD

The INE-Z928HD is loaded with entertainment and information features, including:

Perfect F.I.T. dash kits provide a factory-finish look for the installation of the INE-Z928HD. Ten kits are initially available which fit a total of 20 specific vehicle models, and kits for additional vehicles will be available in 2013 (all kits are sold separately). Each kit matches the shape, color and texture of the vehicle’s dash and comes with the accessories needed for the plug-and-play installation of the INE-Z928HD. The universal trim bezel (KTX-UTB8) can be used with vehicles that do not have a compatible Perfect F.I.T. kit.

“The Perfect F.I.T. dash kit program is based on Alpine of Japan’s highly successful Perfect F.I.T. business model, but has been adjusted to meet North American business needs,” said Steve Brown, product marketing manager and Perfect F.I.T. program lead, Alpine “We’ve implemented a Just-In-Time shipping model for the kits, to ensure that our specialist retailers receive them quickly in order to provide a quality installation experience for their customers.”

Ten kits are initially available which fit a total of 20 specific vehicle models, and kits for additional vehicles will be available in 2013 (all kits are sold separately).