The new XAV-602BT AV receiver features Sony-exclusive App Remote technology for Android and iOS devices, unifying entertainment and control functions for a simplified driving experience. The App Remote feature combines music and select smartphone apps into a single source list that can be safely displayed and controlled directly from the receiver. App content is displayed on the smartphone while audio content plays through the speakers. 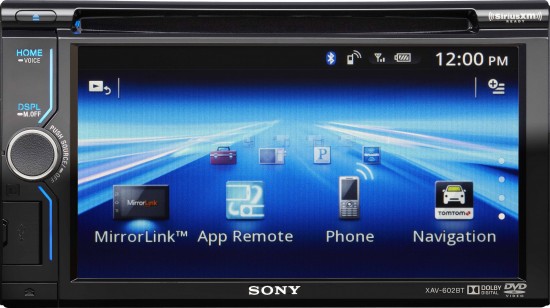 Sony holds the distinction of being among the first to market with MirrorLink enabled products and the new XAV-602BT is no exception. Developed by members of the Car Connectivity Consortium (CCC), MirrorLink is a technology standard for controlling a nearby smartphone from a car’s steering wheel, dashboard or head unit. Sony’s range of MirrorLink-enabled head units are compatible with the Xperia Z and ZL – in addition to select Samsung smartphones.

“With the enhanced Sony-exclusive App Remote technology now featuring a voice UI, the new XAV-602BT entertainment system makes smartphone access and control even more convenient and seamless in the car,”

Exceptional video is combined with the power of Sony’s audio technologies for unmatched in-car sound. With Sony’s advanced sound engine and dynamic reality amp with 52 watts x 4 high power plus a 4.1 multi-channel surround sound and virtual center speaker, drivers experience a louder and clearer sound that is distinctly Sony. With unique sound processing technologies, listeners hear dynamic bass and soaring highs with clarity and less distortion for an unmatched music and movie experience. Also unique to Sony is enhanced radio reception by a digital clarity tuner that improves stereo channel separation and sound quality even while driving in areas with weak FM signal coverage.

The XAV-602BT receiver will be available in October for about $549.99, at Sony Stores, online at www.sony.com/car, and throughout the Sony Authorized Dealer Network nationwide.